"I'm not going to get married. I'm going to live by myself and have a dog and a horse. And, I'm going to buy a yacht. And a yacht for my horse."
-Mia (9), either formulating big plans to become the world's first nautical equestrian, or someone is a little bitter that she didn't get the dog, horse, yacht, and horse yacht that she asked for for her birthday.

"I don't think I've ever been pooped on by a bird."
-Donna, at the Eiffel Tower in February. I'm sure I don't have to tell you what happened at precisely the next moment. Which proves that even the birds in Paris are rude.

"I don't care."
"So what, I've seen it before."
-During our trip to Paris, Mia and Sam react to seeing the Mona Lisa in person. Also, Notre Dame got a big thumbs down from Mia. Tough critics.

"So as it turns out, the key to a good vacation is consuming large quantities of ice cream." -Mark, reflecting on the odd success of our road trip around the Netherlands this Spring.

"Wow, Mommy, you have a really big bum!"
-Nate (4), while sharing a bathroom with me in Portugal this August. The thing that really stings is that Nate only speaks the truth.

"Ooh, a foot cleaner!"
-Sam (7), upon seeing a bidet for the first time in a hotel this Summer.

"I actually like castles now. And I'm not just saying that to get an ice cream."
-Mia, in one of the more shocking revelations of the year, at the  Castelo de Jorge in Lisbon.

"Nate, when you grow up, you're going to realize that everything you say is wrong."
-Brotherly advice from Sam.

"I can't believe how happy I am that French women do, in fact, get fat."
-Donna, during our second trip to France in October. In full disclosure, we were sitting at a McDonald's. So thank you, imported unhealthy American culture-- way to do your thing.

"Is that a baguette vending machine? It is, it's a vending machine just for baguettes. France is so awesome!"
-Obviously I was very hungry (but I still think it's pretty awesome).

Mark: "Nate, what do you miss about America?"
Nate: "The Eiffel Tower."

"Het is zo vervelend als mensen ons vragen om Nederlands te spreken."
-What Mia and Sam say when asked to say something in Dutch. (Translation: It's so annoying when people ask us to speak Dutch.)I thought snark would skip a generation, but apparently not.

"Oh, look! That guy is throwing up!"
-Nate, just yesterday, pointing to a huge picture of a boy drinking out of a bowl at our favorite Japanese noodle place. This quote perfectly encapsulates our Christmas vacation so far, as all 5 of us were struck down with norovirus this week, which we most likely spread to my brother John and his family, who were visiting from England. It was a week of cozy living conditions (11 in our little apartment!), public transportation mishaps, lost children (rather, one lost Sam on Amsterdam's busiest shopping street), and lots and lots of throw up. Merry Christmas to us!


"Gelukkig Nieuwjaar--
we missen je allemaal!"
(Happy New Year-- we miss you all!) 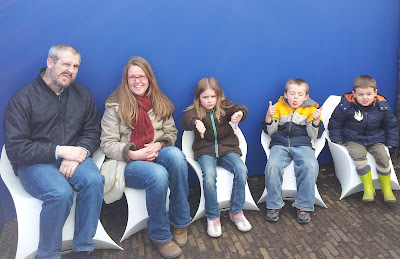 Posted by Bardsleyland at 11:30 PM

Your kids are smarter than my sisters and I were. We just stammered something along the lines of "what do you want us to say?" when people asked us to speak Dutch.

(Also, bread vending machines are awesome. Germany has them too.)

Sam and Mia's snarky Dutch is my fave.

Awesome :) I've been pooped on by a bird and after reading "French Kids Eat Everything" I've decided to dust off my copy of "French Women Don't Get Fat"... Starting tomorrow.

The quotes never cease to entertain me.