A Story of Bike Theft: This Time Vengeance is Ours

That's when we discovered that his bike was stolen, if that's what you still call it when you leave the keys in your bike for the taking. (It's not hard to put two and two together with this kid.)

For some context, within just the past month, Sam has:
That's just in 1 month. There simply isn't enough time or space to list everything before that.

But that morning there was no time for lectures, as he had to hop on the back of his dad's bike and rush off to school. Later, when I picked the kids up from school, the first thing I noticed was Sam not wearing his jacket. He had left it at the playground.

After retrieving the jacket, we went to get on our bikes, and Sam said, "hey, where's my bike?"

"Um, it was stolen because you left your keys in it, remember?"

Sometimes, I find it amazing he remembers to breathe.

While he was perched on the back of my bike coming home from school, I listed all the ways he could earn money to help pay for the bike. And in the middle of my lecture, I spotted something unbelievable: Sam's bike right there on the sidewalk, just blocks from our house.

We screeched to a halt, and stood there for a few minutes, staring in disbelief.

The keys were gone, and it was locked. Oh, did the thief think that was going to stop us?

We zipped home to pick up Sam's recently-copied spare keys, and returned to steal his bike back-- if that's what you call it when you use your keys to take your own bike back.

Such sweet, sweet euphoria. So, on behalf of every victim of bike theft in Amsterdam, we offer you this: 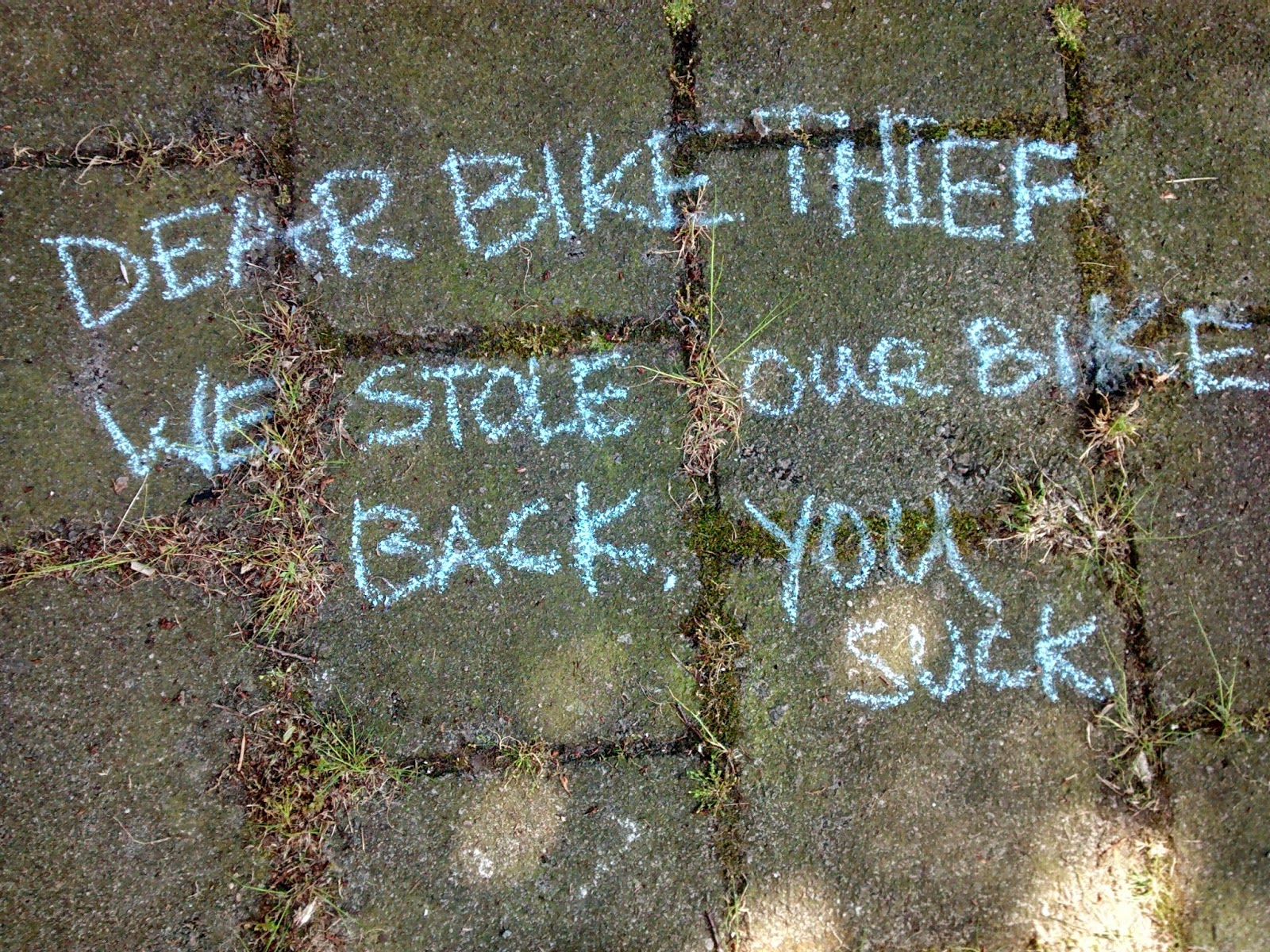 Posted by Bardsleyland at 12:37 PM

Awesome! Time to get a new lock so he can't steal it back with new old key!

Your blog is hilarious! I stumbled across it whilst looking for tips about Amsterdam with young children. We're leaving Australia tomorrow for the holidays in Europe. Its a pleasure to read.

Donna, That's such an awesome story about getting your bike back! I love it!!! Here's something to consider, though: You may not have written that message to the thief. It could have been sold already. When Neil and I lived in Sweden, we bought cheap bikes from a dorm mate and later discovered they were stolen by her! We didn't realize she was a recovering criminal, so when she said she could help us out by finding us wheels for ten bucks a bike, we were thankful. Later, we were embarrassed to learn we had been riding stolen bikes around town. She also made a profit off of us. We thought it was pretty horrible, but European friends said it wasn't as big of a deal as it would be in the US. They said, esp in college towns, it's common to leave a bar drunk at night (unable to drive a car) and just take any bike you can grab, hoping to not get caught. Definitely, not ok in the US! Have a fun summer! Jolene

Jolene, true, bike turnover can happen very quickly.But this was the next day, and it was so close to our house, not likely that it had already been sold, mostly because it was a kid's bike, which are not as easy to sell quickly. Still, definitely a possibility. Another possibility is that a teenager took it for a joyride around the block, left it on the street and thought it would be funny to throw the keys in a canal. We're lucky they didn't throw the bike in the canal, which also happens all the time!

Makes me think of my first month in England where I chucked my rucksack containing my camera in a pile of everyone else's packs. It was at a general conference at church. I couldn't find my camera over the next two weeks, but figured I'd left it somewhere at home. The elders called me up weeks later to inform me that they had finally tracked down my camera that I didn't even know was missing. One of the friends they'd invited to the conference sold it for a few quid plus some gags, and that person did the same, and the last person just destroyed it for fun. The elders made them pay me a few quid and apologize. Sad since it cost a lot more than a few dollars and cigarettes, plus irreplaceable pictures. Funny that this would be only the first of many times I was stolen from.