Get Me Off This Crazy Holiday Train

In honor of the arrival of Sinterklaas in Amsterdam today, here's a post from last year describing the holiday season in The Netherlands.

On November 11th, we celebrated the holiday of Sint Maartens. It's kind of Dutch Halloween in that it involves children going door to door soliciting candy, but with more singing, and less sexy pizza costumes. Instead of dressing up, the kids carry home-made lanterns while singing songs about Sint Maarten (Saint Martin) and in return, get candy. Or maybe mandarin oranges. Or, if they're really lucky, peanuts and black licorice.

Just days later, Sinterklaas (Saint Nicholas) and his Zwarte Pieten (Black Petes) arrived in Amsterdam, and the holiday festivities kicked into high gear. If you're not familiar with the celebration of Sinter Klaas, it is not associated with Christmas in any way, and is instead an entirely harmless and joyful celebration of cardboard-flavored cookies, smelly shoes stuffed with candy, obnoxious wrapping paper, and the timeless tradition of dressing up in black-face and then insisting that it's not racist. 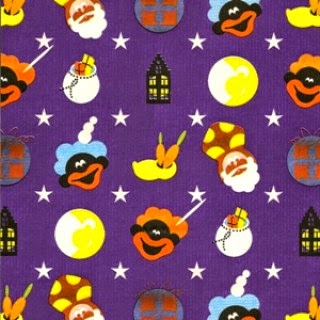 Martha Stewart is offended.
This year we've learned more about two more components of the Sinterklaas tradition: The Surprise, and what I like to call The Poetry Slam. The Surprise is a small, inexpensive gift that is given as part of a gift exchange, but it has to be wrapped in a creative and handmade way, reflecting the hobbies or interests of the person receiving the gift. So if the person enjoys online Gaming, for example, you might turn a box into a game console, but leave it empty to represent the sad and lonely void they are trying to fill. Then you make a poem where you gently make fun of the person, such as: "You play so many online games, guess that makes you super lames." But you would go on and on until you've crushed their soul and extinguished every last flame of confidence and self-esteem. It's all in good fun.

We were introduced to the poems when we went to a Sinterklaas event in an old fishing village, turned outdoor museum, turned Zwarte Piet village for the day. Toward the end of the day we stopped in the Rhyme House, where two of the Petes helped the kids write silly poems in Dutch. We spent about 20 minutes in the cottage, just us and the 2 Petes making rhymes, until a woman came in and demanded to know what we were doing. I was about to answer, well, we're just sitting here, writing poetry with two white women who are dressed up like black men in Renaissance clothes. However, that wasn't what she meant-- as it turned out the village had closed 15 minutes earlier, and we needed to leave. Oh, right. We'll just leave then-- not like we were looking for a reason to get out of this entirely normal, and not at all awkward situation...

Sinterklaas and Zwarte Piet are beloved by the Dutch, and when I say beloved it is in an excessive enunciate-all-three-syllables kind of way. BE-LOV-ED. The holiday is associated with fun and frivolity, and all things happy and silly. Do not suggest to a Dutch person that the tradition has racist origins, and propagates stereotypes in an alarming, if bizarrely well-intentioned, way. Criticizing Zwarte Piet would be like suggesting to an American that apple pie tastes like communism. Or more realistically, pointing out that Thanksgiving can be a painful and unpleasant day for Native Americans. This will be equally ill-received. But, but-- carbohydrates!! Besides, it's not like we continue to propagate hurtful stereotypes of Native Americans. Now, shhhh, the Redskins game is on.

I'm sure that, thanks to their commitment to inclusion and tolerance, the Dutch will eventually find a way to uphold the spirit of this unique holiday while modernizing the implementation. And by the time they do, I promise you, Americans will still be dressing in war paint to cheer for a football team.

Speaking of Thanksgiving-- here is how you might celebrate Thanksgiving if you are an American living in Amsterdam. First you will have to find a poultry seller, whom you can order a turkey from in advance, and then pay the equivalent of $70 USD for it. When you pick up the bird, it will in no way resemble the prepackaged, sanitized, vacuum-packed meat lump you have bought previously in America, but will look exactly like what it is: a recently slaughtered animal carcass, which you will schlep across town on your bike and drop off with your friend, who will have to remove the remaining feathers and other tidbits before cooking it. You will then make a run to the local American import store to pick up some exorbitantly priced canned pumpkin, and where you might not be able to resist the allure of Reeses Peanut Butter cups, even at almost $4 a package. You will spend the day cooking and baking in your compact European kitchen with your compact European appliances. Then you will load up your family and half of a Thanksgiving dinner on your bikes, and ride to your friend's house while hoping she doesn't hate you for the turkey carcass. The evening will be spent in the celebration of imported Stove Top Stuffing, with friends who have become your family abroad, while thanking God for your innate ability to happen to live in a country where you are blissfully unaware of anything having to do with Black Friday. But the next morning you will arise at 4 AM anyway to head to your favorite discount store, bang on the doors until it opens 5 hours later, and threaten to beat the crap out of anyone who gets in your way. Ahhh, traditions.

That's how we might have done it. Who knows really? Glutenous holiday binges leave me a bit confused-- we may have started celebrating Hanukkah somewhere in there too, for all I know. However, I do know that Sinterklaas has his last hurrah on December 5th, and that Christmas in the Netherlands will officially begin on the 6th. At which point I will blast some holiday music, pull out the decorations, write a to-do list, and in the true essence of Christmas, stick my head in the dryer and cry.

Posted by Bardsleyland at 12:39 AM

I've been reading your blog and would gladly trade places with you (only I don't want small children anymore).

Zwarte Piet was in the American news this week. Evidently, some Amsterdamers are marching against the politically incorrect painted black man.

The Dutch are much too stubborn to fall for this, of course.

Louise! I saw a blue Piet on a tram last week. Even the tram driver stopped to take a picture.

But most Pieten are still staunchly painted black. It will take a long time...