The Secret Lives of First Graders

I really, really should go to bed. Right? That's what responsible people do when it's almost midnight and they have three young kids to get up to the next day? I know there are responsible people out there because every morning when Mia gets on the bus at 8:44 AM and I'm standing at the window waving in my pajamas after begrudgingly stumbling out of bed, I see those people with their kids waiting at the bus stop and they usually look responsibly showered and dressed and like they're about to go do all sorts of productive, adult-like things. Of course, that's only on the days that I actually get out of bed to wave to her at the window. On the other days  I just envision all those people in my head while I mumble goodbye to Mia from under my warm blanket. "Bye, I love you. Did you turn the TV on for Sam and put some dry cereal on a chair for Nate? OK, great. Thanks, see you after school." I pretend not to see the scornful looks from the pretend responsible parents, and turn over to go back to sleep.

But that's not the point of this post. I've been thinking about Mia and how none of my irresponsibleness has seemed to rub off on her, which means I get to play the age-old game of "My Kid is Way Better Than Your Kid," which is a long and glorious blogging tradition. My mission here is two-fold. Well, OK, actually it's one-fold: she's paying me 2 months of her allowance to brag about her on my blog. What can I say, I'm irresponsible and can totally be bought. So, game on. 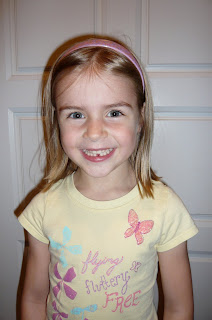 Keep in mind: the girl is not even 7 years old yet.  And yes, every morning while I'm sleeping off a bad night of not sleeping, she gets herself up, gets dressed, combs and brushes all the right things, makes her bed, gets herself breakfast, often makes her own lunch, and throws something in the crock pot for dinner before Curious George is on at 8. Did I say makes her bed? Actually she doesn't do that, because she is so meticulous about her room that she sleeps on top of her neatly made bed just so it never gets messed up.  (Though in the interest of full-disclosure, last Summer we did find a rotting banana under the covers of that neatly made bed. So it's a more of an on-the-surface kind of neatness.)

Some of her friends in the first grade are really into having secrets, mostly about ghost stories or who has cooties and stuff . A few weeks ago, Mia told me, "I'm not really into secrets anymore. Mostly it's just people spitting in your ear." She has a knack for telling it like it is.

Another oddly fantastic thing about Mia is that when she gets a fever, she turns into the sweetest, most agreeable and pleasant child that ever was. She will even voluntarily help Sam clean up his messes and tell him he's her best friend-- as opposed to when she's feeling just fine and loudly informs us that killing Sam might be a good solution to the problem of their not getting along. We tactfully remind her that the correct term for that is 1st degree murder, and the consequence involves going to jail for the rest of your life. Her response to this is, "Well, I could just put something bad in his food, like poison, so he'll die that way without anyone knowing." Ummmm, creative, but still murder.

Oh wait, I was supposed to be bragging, right?

Did I mention she's smart? Before school started in September she repeatedly told people, "I'm a little worried because my bus is going to come in the middle of Sid the Science Kid, but my mom doesn't usually wake up until Word World." That's right, she can totally tell time.

Yes, it makes a parent proud. I can only attribute everything to the shining example of capability and selflessness that she has in her life. I mean, I'm pretty sure that she has an example of that. Probably one of those bus stop parents, being all responsible and caring and helping her get on the bus. I prefer to teach by bad example in my pajamas at the window. Or half asleep and still in bed.  Either way really. Seems she's turning out just fine.

That was so funny I read it out loud to Matt! I find rotting apples behind bookcases and under couch cushions

Drew does the same thing about the bed. He refuses to get under the covers because that would mean he would have to make it the next day.

It must be a first child thing. Ever since John was that age he has got up on his own in the mornings,then he gets in the shower, gets dressed and makes his bed. Now that he is older he is also a big help in getting Jess and Abbi ready. Responsible children are great!!

That was hilarious! I'm glad you live in a good neighborhood like mine where you don't have to worry (mostly) about the other parents calling CPS...I mean, it's okay for a five year old to walk his sister to the bus stop, right? I can totally almost see them the whole time, and there is very little traffic.

She definitely has your wit. "Secrets are more about people spitting in your ear." I love it!

Sometimes when I read your blog, I feel like I am reading about my future.

Love that Mia. Hilarious! You should brag about her more often. Love it.

This will be my life. Can't school start at 10am?

You are so dang funny.

I see nothing wrong with bragging as long as it's true. Then it's not bragging. IT'S A FACT!
haha