And now for something a little less depressing

Let's lighten things up a bit shall we?

I promise it's not all doom and gloom around here. In fact just yesterday Mia got her first phone call from a BOY, asking her for a playdate. It happened right in the middle of one of Nate's massive blowouts, which she described very excitedly and in full detail to the young boy. I'm sure he was very impressed by this and thought it was pretty cool, since poop is about the #1 favorite subject of most 6 year olds. The conversation then ended like this:
Mia: What are you doing?
Boy: I don't know.
Mia: OK, bye.

He then had to call back to actually set up the playdate (which is scheduled for tomorrow). When she got off the phone I said, "So are you guys pretty good friends?" and she informed me that they were not only friends, they were going to get married. I guess this is something to be relieved about because up until now she had plans to marry Sam (who she has also taken to calling "Uncle Chut"). In fact, we've had many conversations that involved her wondering
"when they are going to change that law so that you can just marry your brother if you want to."

It's so sweet and yet so disturbing at the same time.

Here is a picture of them playing "camping" yesterday, which like most of Mia's play schemes, involves a very elaborate and involved set-up, and then a lot of sitting around and looking at it while sucking her thumb. I should also point out that these pictures were taken after they had decided that 48 degrees and partly cloudy meant it was practically Summer and played "beach" in the front yard-- complete with bathing suits, towels, beach chairs, and of course, lots of water. 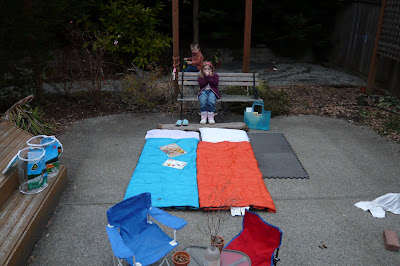 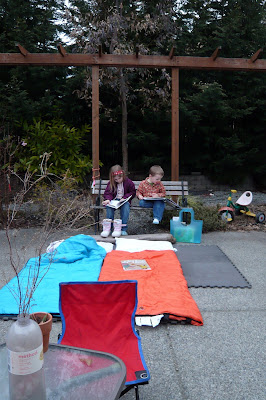 Those kids... when they're not driving me crazy, they're usually making me laugh my head off.


And on a completely unrelated note, I feel like I have to even the score after my little "jab" at Republicans, lest any of you get any ideas about my political ideologies. I've been trying to think of something to zing those Democrats with, but it's got me thinking: maybe I should actually join the Democrat Party . I didn't realize until recently that being a Democrat meant that you could vote to increase everyone else's taxes, but not actually pay those taxes yourself. Sweet! Oh you kooky politicians, will you never tire of providing so much good material for Saturday Night Live? Here's one of my favs from this season.

OK, I love these pictures. I hope Mia and Sam never lose their creative talents and wonderful imaginations.....I'm sure they both keep their teachers entertained as well. Keep smiling, Mommy!

I love that picture of Mia sucking her thumb and Sam in the background making a funny face, these are the kinds of pictures I love...kids having fun and being silly.