The House That Sam Broke 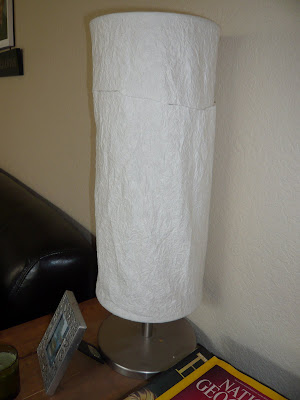 I just wasted away a few minutes of my life taping up a paper lamp from Ikea. I know, that's what I get for thinking that a lamp made out of paper for $2.49 from Ikea was a good idea and/or in good taste right? But really, it fared quite well for a long time.

Until Sam came along. Lamp, meet Sam. Sam, meet lamp. Lamp, so sorry about that big gash. Sam, go to your room. Self, get out the tape.

So I taped up the lamp and put it back on the side table, next to the frame that no longer stands up by itself, thanks to Sam.

Just before fixing the lamp, I picked up Sam's toy rocket that we've had for one week and is already broken in two places.

I put the rocket on the counter next to the pile of Tupperware lids that don't have matching containers anymore, because they are probably out in the yard being used as snail houses.

Before that I was wiping off our table that now has nail polish, permanent marker, paint, and (Sam's) bite marks on it.

On the table was an assortment of broken crayons and dried out markers with no caps that I stashed away in a cupboard with a door that won't close because somebody (guess who?) was swinging on it.

I won't even tell you about the state of the games, toys, and miscellaneous items inside of said cupboard. Well, OK, I will: 2 board games missing pieces that render them pretty much useless, a ripped parachute, about 8 containers of dried out, mixed up play dough, and a stained Aqua doodle. And that's just off the top of my head.

In the same room as the cupboard is the TV/DVD player that we will someday have to remove from the Armoire with a chain saw (our fault), which we have to use the plug to turn off and on, and no longer plays DVDs (both of which are Sam's fault). Not that we have any DVDs that Sam hasn't scratched or bitten or drawn on anyway.

The tale of destruction continues throughout the house.

Here's the moulding that he took a bite of a few days ago. 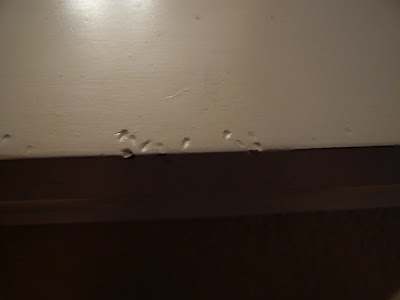 And our piano that Sam broke over a year ago? Broken even a little bit more now.

This is the most recent pile of casualties from his room: 5 books ripped apart. 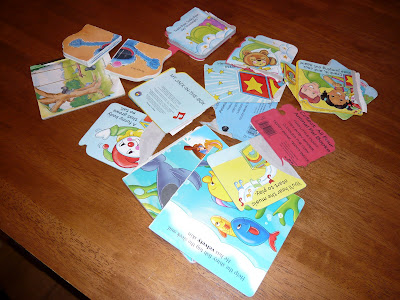 And here's something fun: a box of baby wipes that he got to with a pair of scissors, AND ONLY STABBED THE PICTURE OF THE BABY, REPEATEDLY. (What he was doing unsupervised with a pair of sharp scissors is a very good question and is currently under investigation. I'm sure there is some body/thing to blame besides me. Probably corporate media, but that's a blog post for another day.) 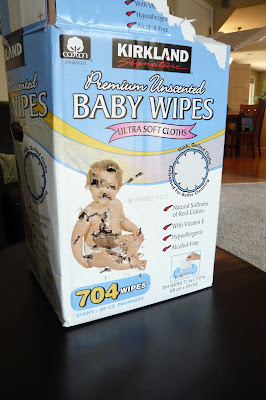 Some people can show you their collection of highly prized curios, or rare objects from their travels around the world. If you come over to our house we'll show you our taped up Ikea lamp and our mutilated baby box. It's an art form in and of itself.

Oh Donna, I am so glad we are friends. You make me believe in motherhood.

Welcome back! I love the baby that was stabbed! Hopefully Child Protective Services doesn't read blogs....

Welcome back. I love how real you are. You make me laugh and chuckle to myself.

Hilarious. Despite all that your house still looks cooler than ours.

You won't understand this post by your mom while you are a kid but once you become a parent you will.

You always love your children but sometimes it is hard to remember why.

I agree with John. Our house is cool. Kind of like a junk yard is cool.

I think the repeatedly stabbed baby is my favorite part, or the bite marks on the table and molding...it's difficult to say.

Thanks for coming back to the world of blogging. I haven't laughed this much at a post since you went on your hiatus.

Oh boy...Sam and David should be friends. On second thought, maybe not. It's frightening to think of the things that they may conjure up together. We might be moving back to Seattle in a few years. Perhaps we should not introduce them. It's nice to know I am not alone though.

Oh, so I am going to Southern Connecticut State University doing a master's in English Lit. I am only on my second week, but so far so good.

I am so glad you are back! This made my day.

I think I bonded with you just now.

That stabbed baby cracked me up! I wonder what he was thinking when he did it ...

I'm so happy you are back. Ben and I laugh at your blog. I love the diaper box with stab wounds.

Can we form a support group?

lol that was emily

Emily was thrilled that you are posting again. I can't believe she figured out how to leave a comment using the identity "Child Protective Services". I just barely figured out how to change our identity so it doesn't have an ampersand in it. Kids these days, with their tech-savviness.

I love this post. You are printing these out so you have a hard copy for ever and ever right?