I figure as long as I'm still accidentally writing 2012 every time I write the date, I can legitimately post about things that happened in 2012, right?

You know all those people who are so embarrassed that they are just now getting around to posting about Christmas, which was a full 3 weeks ago? Well, this blog knows no shame, and people, we're going all the way back to May.

Specifically, I think the warmest weekend we had the entire year here in the Netherlands.  This was one of the 6 days last year that we wore short sleeves. Ahhh, memories. 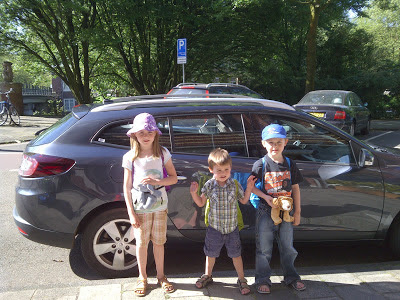 Anyway, we rented a car that weekend and took a road trip around the Netherlands. It's not the tiniest country in the world, but I'm pretty sure it could still fit within the entire state of Washington. In 4 days, we were able to hit 3 of the 4 furthest corners of the country. The reason I'm dragging us all down memory lane is because I found a bunch of pictures that Mia and Sam took from that weekend. Such as this one: 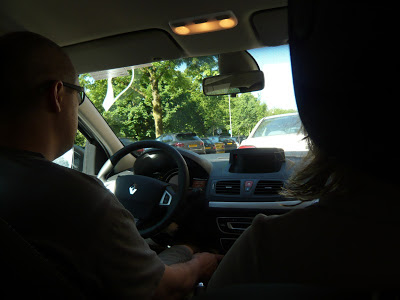 Here's the view from the back seat. Why are the lights on? I don't know.
It'd been a while since we'd driven a car. 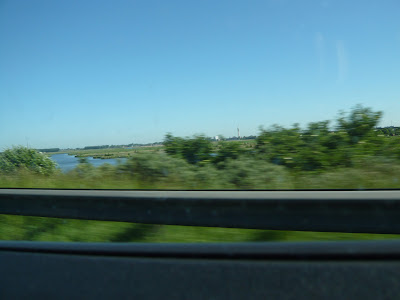 There are about 126 pictures that look more or less like this one. 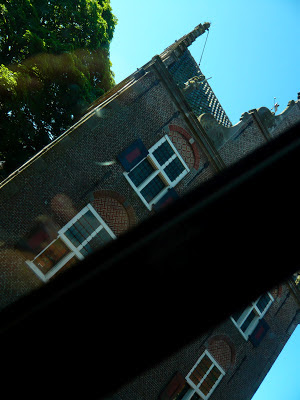 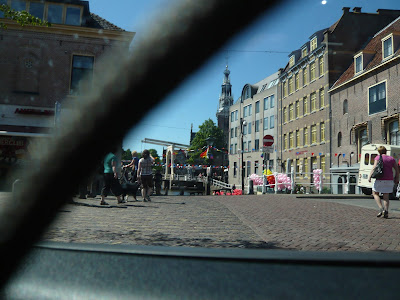 OK, you get the idea. 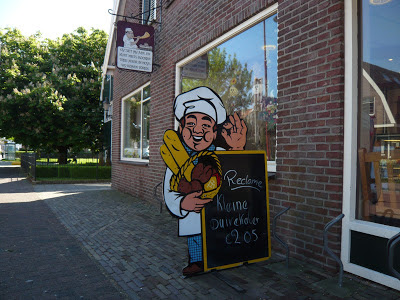 This one is actually in focus, and has a good story to go along with it. We stopped at this tiny bakery in a village just North of Amsterdam, specifically because (and stay with me here) it is the original family bakery of some people who immigrated to the US and started another Dutch bakery in the exact city in Washington that we used to live. That made no sense.

So we lived in Washington and used to go to this wonderful little Dutch bakery, and when we told the little old Dutch lady who owns it that we were moving here, she told us that her relatives still own a little bakery in a tiny town in the Netherlands and that we should go visit it. Got that? So we walk in to this bakery, and I start explaining to the woman behind the counter that we used to live in America and went to the Hillcrest Bakery all the time. She gives me this awkward smile and indicates she is waiting for our order and has no idea what I just said. We place our order, and before leaving I again tried to explain why we had stopped by. Again, awkward smile, this time with a nervous laugh. I think I honestly expected that they would throw us a big party. "Hey!" she would call out to the rest of the family in the back, "these people come from America! They know Oma Leida!"  Then there would be an outpouring of joy and the whole family would come out, give us big hugs, show us the kitchen, demonstrate their secret recipes, take pictures with us, invite us to their family reunion, something like that. Instead we just slipped out with our apple turnovers, got back in the car, and after a while, laughed hysterically. True story. This is us driving over one of the really long dikes that the Netherlands is famous for. You may not know that almost half of the country used to be under water. This demonstrates a crucial difference between the Dutch and most other people. Most people look at picture like this and think, "ahhh, the ocean." Most Dutch people look at a picture like this and think, "ahhh, future real estate." 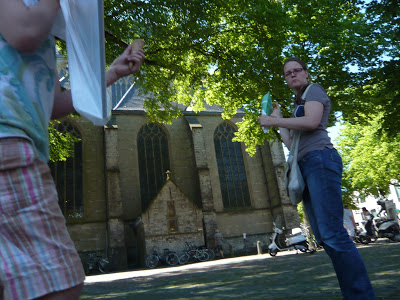 It's always good to know how mean I can look while eating fries in front of old cathedrals. 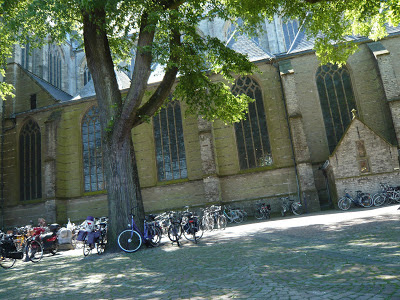 What I love about any random picture you can take in the Netherlands is that there will most likely be a few bikes in it, give or take 50. 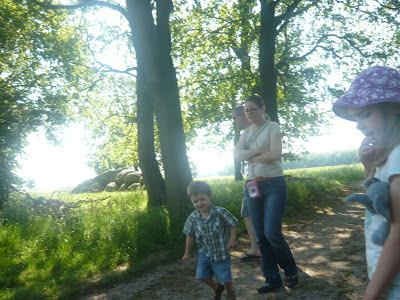 We ended up in a part of the country known for its ancient megaliths, and managed to find this small one (you can see it behind the trees, to the left). There were no signs or markings-- we had to ask some locals and they directed us to a completely unmarked trail. And when we found the megalith, there wasn't even a historic marker. It's just sitting out in a field, you know, all nonchalant. 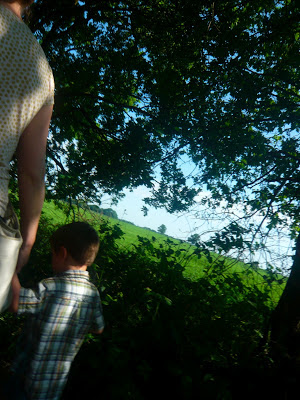 It was a beautiful, sweltering day. Perfect for complaining loudly about dumb, old rocks. 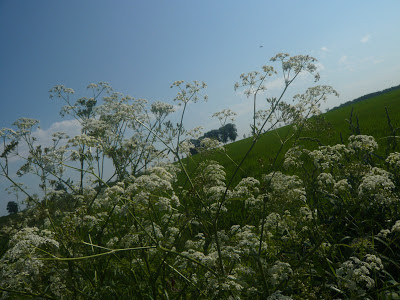 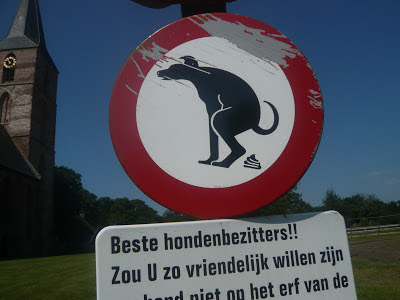 The kids may not have cared about thousand-year-old burial mounds, but boy did they love this sign. 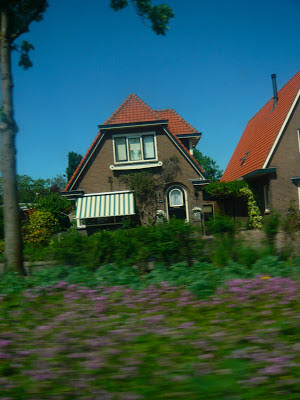 We stayed in three different hostels, all in historic buildings. One was a castle and it looked like this: 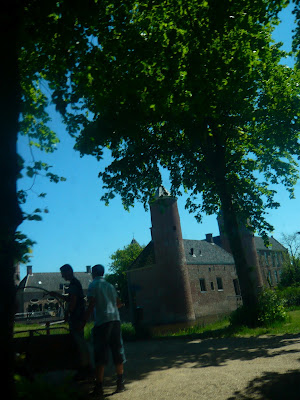 But on the inside, they all looked like this. 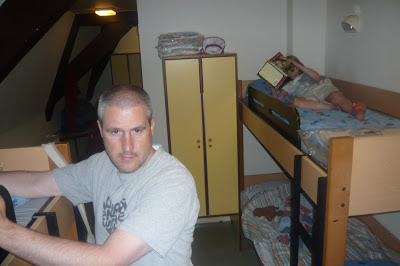 The kids thought they were the nicest places we've ever stayed. They also like bad Chinese food, and think that stick figure drawings make fine art.

These next few pictures are ones that Mark took early one morning out in the Dutch countryside. The first night was ridiculously hot, and Mia and Sam both woke up at 3 in the morning and would not stop messing around. At 5:30 Mark took Sam out for a drive to separate them, as well as to spend some quality time with the AC. This picture is time-stamped at 5:45 AM: 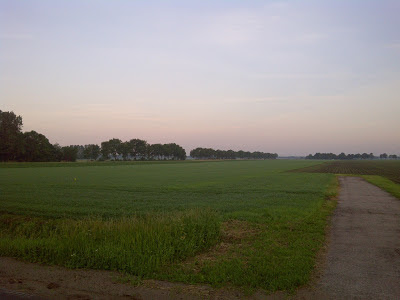 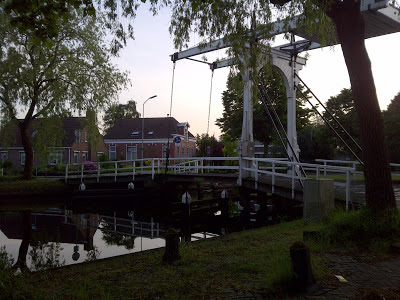 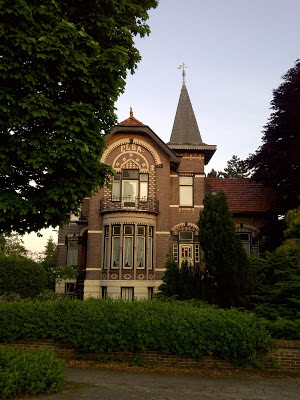 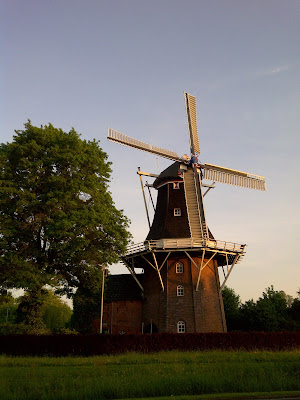 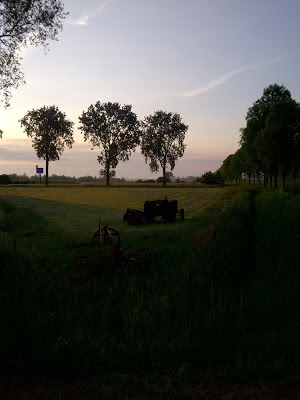 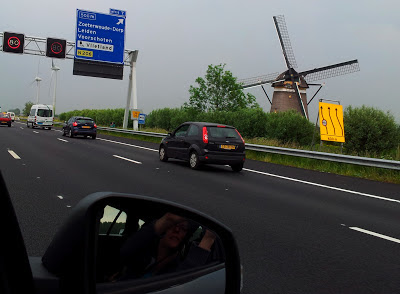 This is my trying to get a picture with both the old windmills and the new windmills in one shot, which for some reason I thought would be pretty cool. Then I remembered how much I suck at taking pictures.

Mark has some decent photo skills and he snapped these two, They're my favorite from the trip. 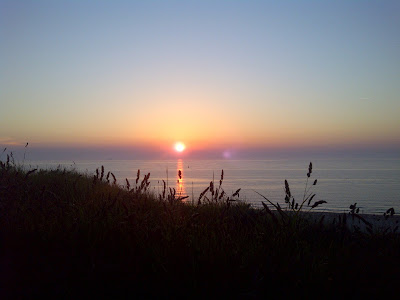 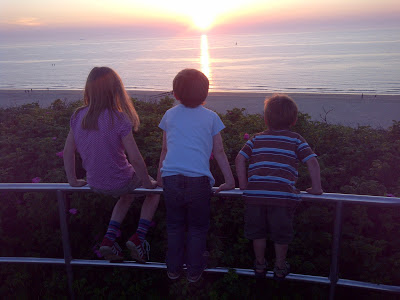 This may the world's most adorable picture, but I promise you that at this exact moment they were talking about poop. Such sweet angels.