Vote here! Voting is open until February 11 and the winner will be announced on February 12, 2009.

(BTW, I voted for the Dallas Cowboy Cheerleader Barbie. How about you?) 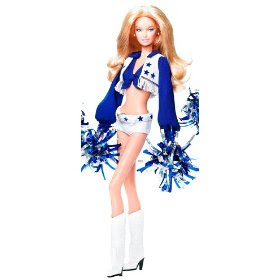 I just voted for the cheerleader too, ugh.

I love how her waist looks like mine. Just kidding. That's pretty bad.

How did you scroll past the Fisher Price Escalade to get to the Barbie? I saw that and started hunting for the vote button.

It was a hard choice between the Barbie and the Escalade, but in the end the feminist in me won out over the environmentalist in me. Gooooo Barbie!

That's what I voted for! One of the most evil things about it is that some people would see it and not even think twice about buying it. Maybe it should come with a video of the reality show, for a double dose of yuck.