So Winter Came and Went

I'm about to break my own blogging rule, and talk about the weather. And I'm going to post pictures of said weather. And then we're all going to politely pretend like it's the most fascinating thing we've ever talked about, like we do with every grocery checker we talk to. OK?

Nate and I went for a walk this morning in the snow, but by this afternoon, it was almost entirely melted. It's amazing how warm 36 degrees (2 degrees Celsius) can feel after 2 weeks of sub-freezing temperatures. We almost went out in sandals.

We now know that there are two items that every person in the Netherlands owns: a bike, and a pair of ice skates.  When it freezes here, all those canals turn into skating rinks, and suddenly everyone is a figure skater. Biking in the snow is not so fun, but walking on the canals is actually a blast. Plus it was all we could do, dumb foreigners that we are who didn't bring our ice skates that we don't own (this is inconceivable to the Dutch). 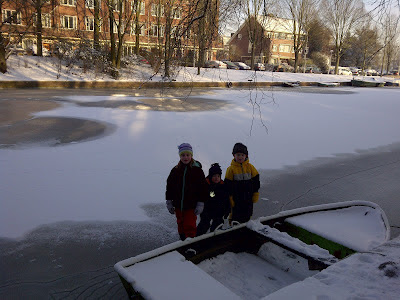 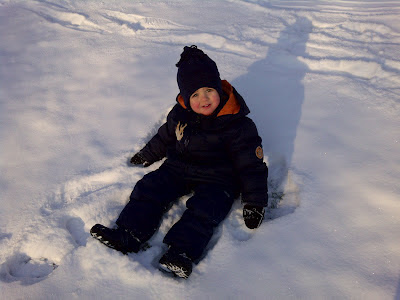 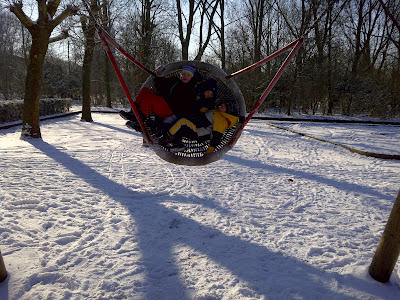 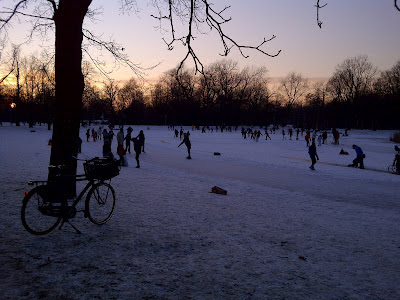 In front of that tree is a pond, and those are the ice skaters. Notice the bike. I love this place.

The freeze wasn't quite deep enough for the Elfstedentocht to take place, but for a few days the entire country was taken over by ice fever. The 11 city, 120 mile race hasn't happened since 1997, but if the ice ever gets 15 cm thick across the entire course, the race takes place within 48 hours. That is some crazy Dutch speed-skating love for you. According to some reports, it was even supposed to fix the EU crisis. Now that would have been one incredible race.

Posted by Bardsleyland at 12:34 AM

Looks like a fun family day had for all!

Though I admit that I am somewhat less than eager to leave the companionship of the sun behind me when I leave New Mexico.

Ha, I can't skate and indeed my fellow Dutchies feel my parents ruined me for life. Those that don't own skates right now certainly have memories of childhood winters spent on a canal..(I for one think they're making them all up, since I've lived here for 15 years now and the winters in which you could actually skate for any period of time are few and far between. Or maybe I miss the skating season because I'm too obsessed with complaining about the snow that means I can't use my bike and the NS doesn't run on time or even run at all. I don't like winter.)