Made it through the day

So I am resisting the urge to apologize for that last post (you know the perfunctory "sorry for being so negative" rider following a downer of a post). Thanks to everyone for the sympathetic comments. I had a bad night, and they happen to me more often than I would like. There are worse things than not being able to shut your brain off at 1, 2 or 3 am, but when you're in the middle of it, oh, it's beyond frustrating and it's hard not to throw yourself a big pathetic pity party. So I captured the moment and sent it out into cyberspace. And then woke up the next morning (eventually), and muddled my way through the day like I always do. All in all we survived the day fairly well. It's a good thing we're still in the middle of life with an infant and my kids have learned not to expect much from me, so they weren't too disappointed. But here's a moment that needs to be recorded:
Note: for security purposes I have decided that from here on out my kids will be referred to as Abcde, (pronounced Absidee), LeVoyd, and Miracle's Precious Gift, (or MPG for short).

Last Friday I woke up completely motivated to potty train LeVoyd (we were out of diapers). After about 4 hours I was pretty much out of momentum, and had eaten most of his potty treats anyway, so I gave up. Abcde however, still had the drive and tried to pick up the pieces of my ridiculous attempt. Over the course of the weekend, the 2 of them would have potty parties and I would overhear snippets of the most hilarious things, such as Abcde saying, "and then you'll have to earn some money and get a job OK?" Not much progress was made despite the valiant effort, but luckily no accidents either. That's why today when it was quiet time and LeVoyd wanted to have some potty time, I (in my sleep deprived state) just brought his potty into his room and let him have at it. I'm pretty sure I meant to check on him a few minutes later but I got caught up reading some really important blogs and then took a shower and did some other stuff. Eventually I went in his room and found this 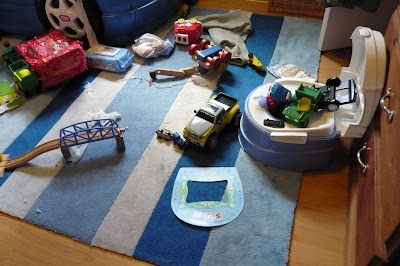 and more specifically this 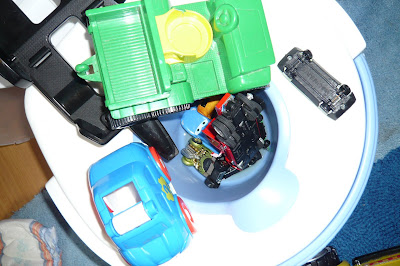 Don't look too closely, but there is a suspiciously yellow liquid in the bottom of that potty. I'm not sure when the cars ended up taking a dip, but there they were. So of course we celebrated, and promptly cleaned all the cars. I'm hoping his big sister will have him potty trained by the end of the week. 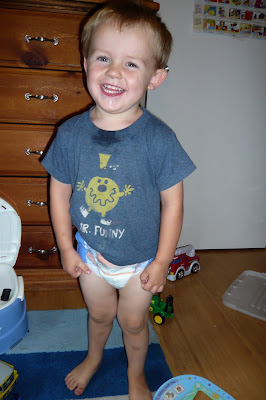 I keep hoping that Grace will potty train David when the time comes. It would save me a lot of grief. Thanks for sharing your thoughts the other night. It made me feel a little less guilty for having similar thoughts myself sometimes.
Oh, I am finally reading the Glass Castle. It is so good.

Glad to see LeVoyd chews his shirts too. I have my theories but I am baffled as to why both my boys gnaw collars until they are ragged. They stretch out so much you can take the shirt off down rather than up.

Yellow submarine cars are a small price to pay. Ryan was doing great and then he relapsed a bit in July. It was rough on him, but he grew up a bit the day we started throwing out any clothes he pooped in. You know how kids love specific clothes.

Jessica is the one that potty trained Abbi. They love to be like their big sisters. Good luck with it all.

No No No! Your post was PERFECT. You captured the feelings we all have had, but you did it thoughtfully and with your personality coming through; and you did it without being either saccharine-y or common, the pitfalls most of us fall in when we try to express how we feel.

And I'll say it again: I love that you have these feelings, because it confirms for me that this is part of the nature of parenting.

James is sitting here wanting me to go back so he can read the potty-training post; he enjoyed Ryan's story quite a bit.