When it comes to Nate, we're half seasoned parents (note: that doesn't mean good parents, it means much of the time we forget where he is, he hardly gets bathed, and the binky doesn't get cleaned when it drops on the floor), and half blubbering, goo-goo eyed, "isn't this the cutest baby you've ever seen?" variety of parents. The kid is 12 weeks old today, which means he is more baby and less newborn now. It means he is sleeping 10+ hours at night, but still needs a little help with the binky and swaddling, and he smiles and coos at us, but also demands a little more attention and cuddling too. It also means he's entered the blow-out stage where, rather than multiple episodes of minor seismic activity throughout the day, he experiences major Mt. St. Helens size eruptions every 1-2 days that leave him literally covered head to toe in poop. (My apologies to John Young for such graphic descriptions of #2, and my apologies to Nate for putting such personal details on our public blog-- when you're a parent you can do the same buddy). And finally, it's been enough time since his birth that the complex process of insurance claims and medical billing in our behalf has come to an end, and the result? Over $2000 out-of-pocket. Ouch. I figure, with Mia we paid about $300 total, and Sam was a freebie from the state of Washington, so the average is about $800 per kid. I doubt we'll ever spend that much on any of their birthdays again. Too bad for them. And since we no longer have enough money to plan our master bath remodel, I guess I have some time now to post some recent pictures of him. So here you go: 12 week old Nate. 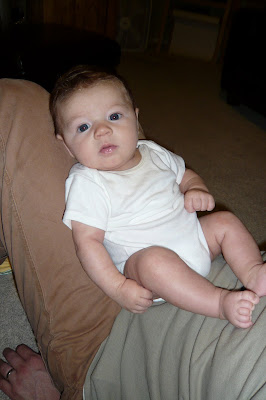 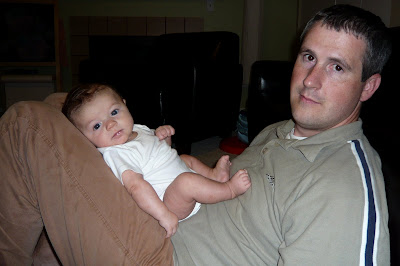 I am sure I do not have to tell you that he is absolutely adorable, but he is. That video is very cute.

Have I mentioned lately how much I love this kid? He melts my heart!

That video is so cute... and I love that picture of Mark and Nate. I now believe he is the antithesis of birth control.

No worries here. If you recall, while Mia was spewing everything she ate, Jacob was blasting it out the back.

In other words, I've been to the party you are having with Nate.