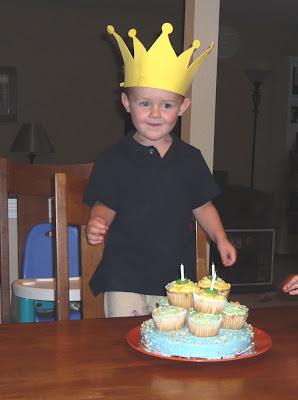 Sam had a birthday a while back, and ever since has been doing his best to live up to his full 3 year old potential, which is encompassed in his motto: "Chaos, panic, and disorder- My work here is done." His current skills involve going from sweetheart to monster and back in about 6 seconds flat, provoking his sister to hysterics with almost no perceived effort, and the delicate art of saying "Mia hit me!" with the perfect combination of indignation and injury. Thanks to Sam, there is nothing that we own that hasn't been chewed on, ripped, broken, drawn on, thrown, dropped, or at the very least, covered in something sticky.

The flip side of being 3 and being Sam is that he has about a million ways of making me smile each day, often at the same time that I want to scream. When he "colors" he holds the picture up for me and says "ta da!" I just love that. He has this funny ear trick where he can tuck both ears inside of themselves. Sometimes I find him walking around with both ears folded in and I just love that even more. You should see this kid getting on and off the bus for preschool with his little Thomas the Tank Engine Backpack-- melts my heart every time. Even though most every day from the second he wakes up I can't wait until he goes back to bed, once he's finally asleep again I usually can't help but go in to stare at him, being STILL. 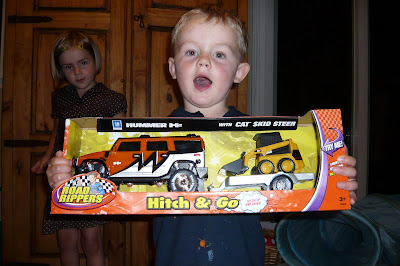 It's ALL about trucks, and cars, and tractors, and motorcycles... 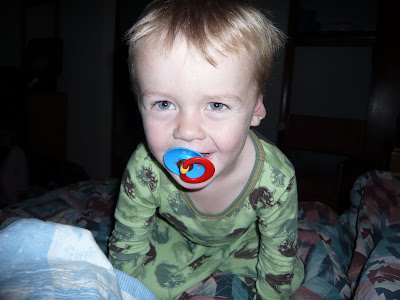 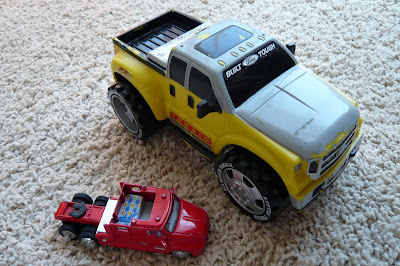 His most beloved and abused trucks. 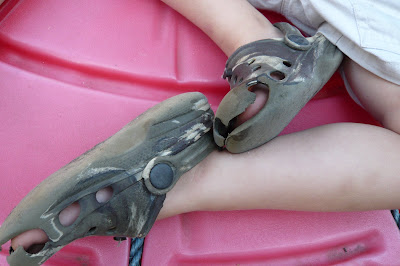 Never judge a 3 year old until you've walked a mile in his imitation Crocs.

Happy Birthday Buddy! Hope you make it to 4!

*(Every time I have tried to work on this post, I've been interrupted by Sam making some kind of trouble. I guess I should actually pay attention to my kids rather than trying to blog about them-- ah, the paradox of being a mother in the Information Age.)
Posted by MAB at 8:03 AM