We took 3 kids on a plane to Colorado...

...and we didn't even have to break out the benadryl!

A couple of weeks ago, we took a trip to Colorado. It was 2fer, since in one trip we got to see my parents at my mom's Family Reunion, and Mark's mom and step dad came down to spend time with us after the reunion. Love those kind of multi-tasking vacations! When we got off the plane in Denver, as luck would have it, we got to spend some time with my brother Arnold and his wife Denise, who were leaving on a flight to California just 20 minutes after we got there. Here we are with Arndog. I've been told there is a slight family resemblance. 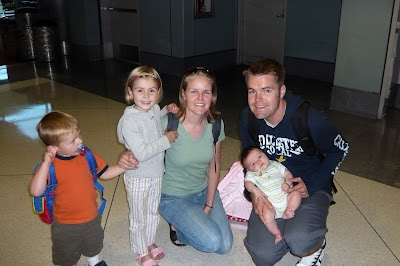 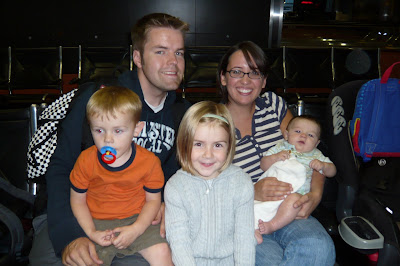 I think if it was up to Sam we would have one of these moving sidewalk things installed in our house. We had to ride it at least 10 times. 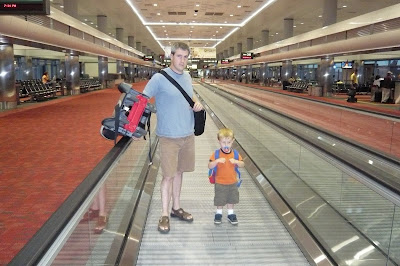 The Bartholomew Reunion (yes, my mom is a Bartholomew-- isn't that awesome?), was in the Rocky Mountains at this enormous YMCA compound. There were over 60 of my aunts, uncles, cousins, and all of our kids staying in a huge lodge, and we all thought it was really fun to stay at the Y.M.C.A (sorry, couldn't help myself there).

A little advice: it's not a good idea to go from sea level to almost 10,000 feet and then pretty much immediately go on a hike. Nothing like huffing and puffing along an essentially flat trail to make you feel like a complete wimp. Here's Sam the Mountain Man: 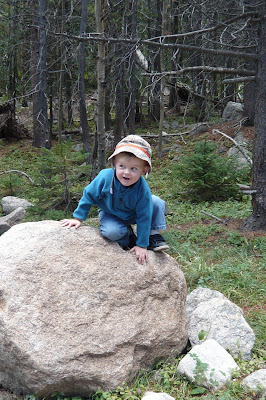 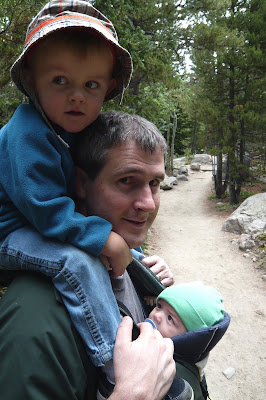 Check out this crazy squirrel. Later on, another one practically sat on my lap while I was eating lunch.
It was so beautiful up there. "Rocky Mountain High" anyone? 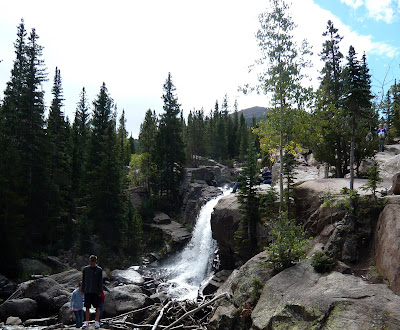 Back at the lodge...there's nothing like a little Yahtzee to shake things up. 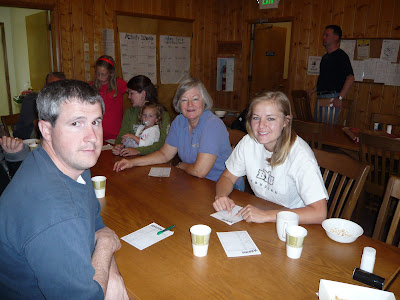 The gaggle (yes, a Gaggle) of great-grandkids. Can anyone guess what they're doing? 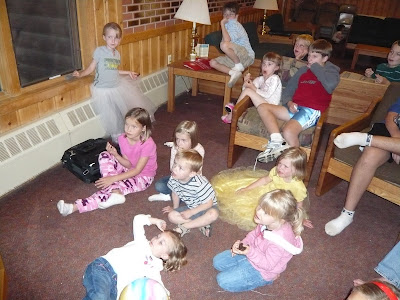 Here's some irony for you: we left Seattle (yearly rainfall: 38 inches) where it was sunny, to go to Denver (yearly rainfall: 15.4 inches), and had to pay $30 to climb on fake rocks indoors while in ROCKY Mountain National Park, because it was raining. NICE. 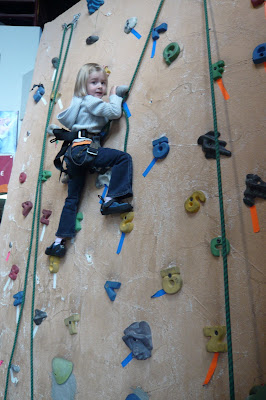 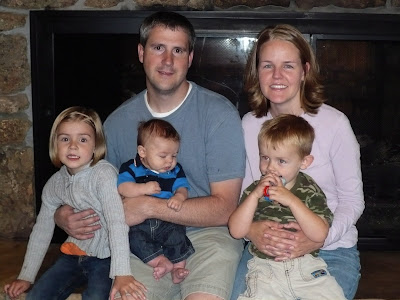 This has nothing to do with the reunion, but when Sam eats donuts, he just licks the icing off the top. 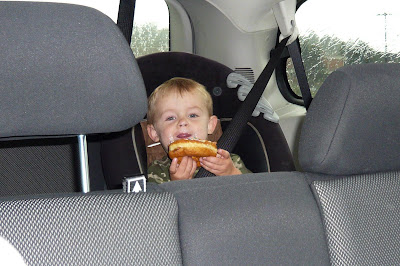 Moving on to phase 2 of our trip-- Mark's mom and step dad drove down from South Dakota to spend the weekend with us in Denver. The first night we went to a place called Casa Bonita for dinner. I've been postponing this blog entry for so long because I've been trying to find a way to describe this place. It's like a mix between Chuck E. Cheese, Taco Bell, and Disneyland. Seriously. If you've lived in Denver, help me out here, leave a comment if you've been there. There's a 17 foot waterfall in the middle with cliff divers, strolling vendors peddling cheap fiber-optic toys for exorbitant prices (yes, we bought two), arcades, a creepy cave, and caricaturists who you can pay $15 to draw a picture of you with a really big head on a surf board. Anyway, this picture does it no justice, but here we are in the middle of our Casa Bonita experience. 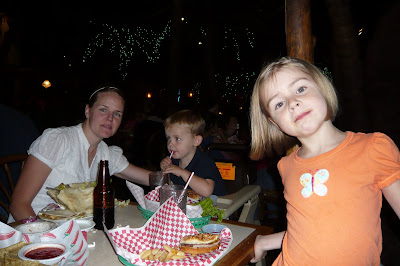 And by the Casa Bonita fountain. Thanks Linda and Ron, for quite the dining adventure! 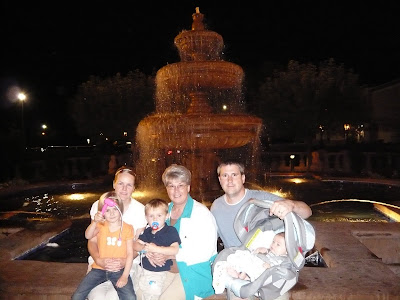 If you are a parent who has ever taken young children on a vacation, then you probably have a good idea as to why we took this picture. If you don't, then your time will come my friend. HA HA HA!!! 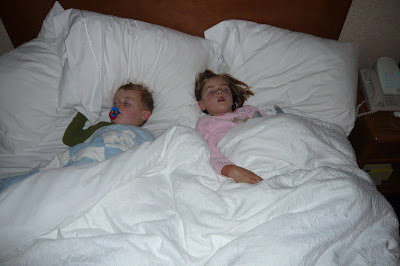 Since Casa Bonita wasn't quite enough of an amusement park for our tastes, we decided to go to a real one the next day. Here's Mia on the Ferris Wheel at Elitch Gardens in downtown Denver. Mia LOVED the rides, and we even tried to sneak her on one of the roller coasters, but got caught. (Dang height restrictions...) 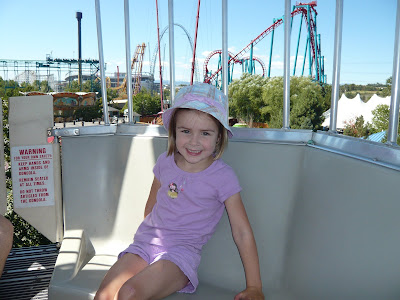 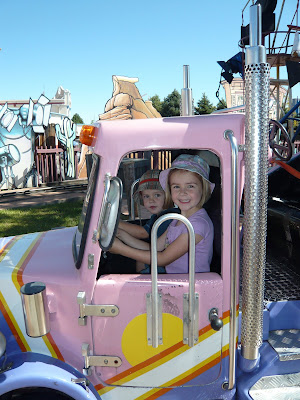 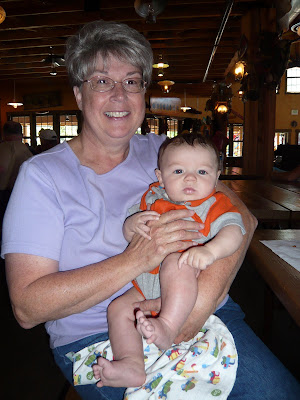 Every once in a while you get really lucky, and when your kids are super tired after being at an amusement park all day, instead of having a meltdown you get a cuddle on the merry-go-round. 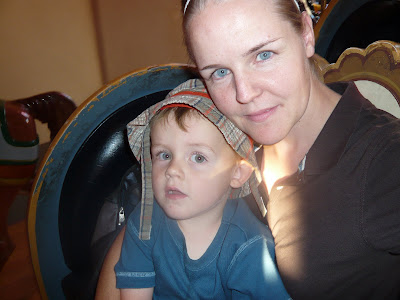 At the Colorado State Capitol Building. Note the inscription on the step. 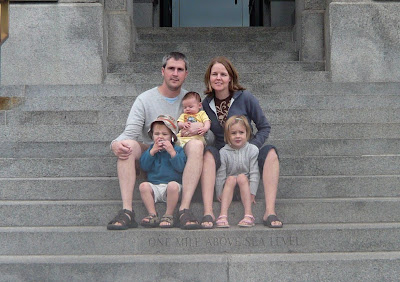 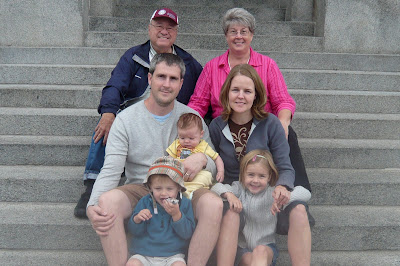 We spent the last few hours before our flight home wandering around a really cool urban park in Denver. 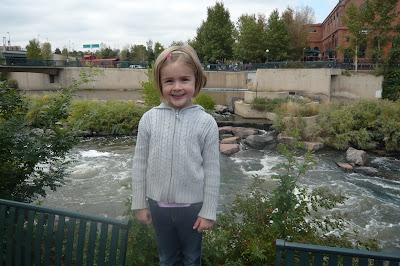 This picture is for all the Stovalls: recognize that smile? 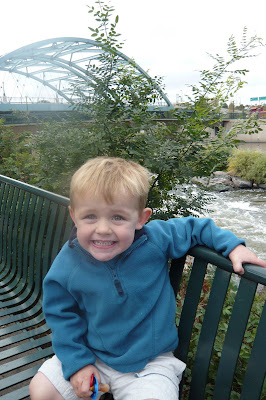 "Kids, try to look like you were really nice to each other on our vacation and I'll take you to McDonald's when we get home OK?" 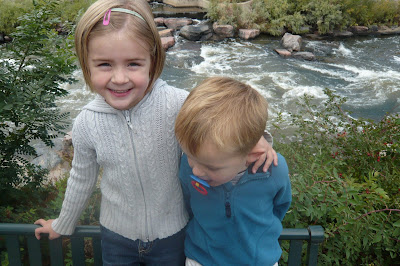 We took a little trolley ride and ended up in front of Mile High Stadium, where a Broncos game was just about to start. We were the only ones on the trolley not wearing orange. 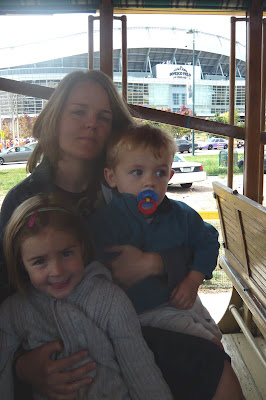 And right before we left we ended up having lunch at a Starbucks inside an REI (so essentially we flew all the way to Denver to go to 2 Seattle institutions). This picture is for the Bardsleys: yes, that is Linda and Ron enjoying a caramel apple cider from Starbucks. We've officially corrupted them. 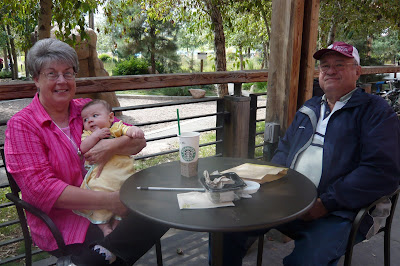 And that's what we did on our Summer vacation in September.
Posted by MAB at 12:19 AM

Haha! Casa Bonita! Being from Denver, Casa Bonita is a landmark, an institution. We would go there every Halloween. I always loved this place (though the food is gross) and didn't realize how tacky it was until I took some friends from college there and they were pretty underwhelmed and called it the Mexian Chuck E. Cheese. I don't care, I love that place.

I meant to call you a few weeks ago. I was in Seattle visiting my sister. It was a short trip, but we should have gotten together.

I'm a Denver Native (Englewood actually) Haven't been back since I was 8 months old. That must have been the park where you called me from Mark. And Louise and I love to go to starbucks. When we lived in Vegas, we must have went there every Monday night for FHE, vanilla frapuccino (sp?).

When we lived in Cheyenne we went to Casa Bonita once, and a Mexican Chuck E Cheese is a very good dicription of it. It was a fun place to go and see once, but I think that once was enough for us as we never went back again. It looks like you all had a great time. We love you all and miss you.

Donna, thanks for the pictures of the reunion. It looks like you had a great time.

SLC had/has a restaurant like Casa Bonita called the Mayan. We went there once with Bob's family; there was a long winding tunnel to handle the nightly line JUST like on the rides at Disneyland. Yes, they had University of Utah diving team members hired to do stunt diving. I dunno- you're eating, and the guys are in speedos- kind of yucky.

I just showed these pictures to Ryan and he said "Mia and Sam's family go on lots of adventures". Can we go on some adventures like them?