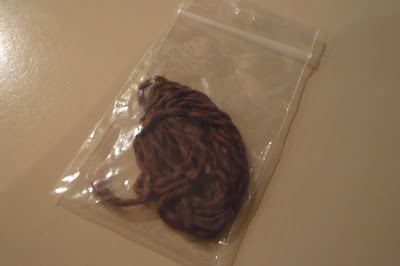 Recently I bought a sweater. Attached to the tag was a tiny ziploc bag of yarn, which just begs the question: where can I get these adorable ziploc bags?

But really, that yarn is getting me all unraveled. It's been floating around my house for weeks now, just driving me crazy (because obviously I don't have any real things driving me crazy or else I wouldn't be on a rant about a tiny bag of yarn). So I ask you, what, in the name of all that is organized and efficient, am I supposed to do with 3 inches of brown yarn? I suppose it's meant to be the sweater equivalent of the extra button, but really, what do they think I'm going to do if this sweater starts unraveling? Run over to my file cabinet and look in the "Yarn, mini ziploc bags of" file?" Which brings me to first dilemma: where to put it. Every time I see it, it seems to taunt me Just try to find a place to put me without ending up at Ikea buying a entire wall storage system with little tiny drawers, and baskets-- lots and lots of baskets. I dare you. Seriously, those are fighting words.

I know, just put it with all those extra buttons and get on with your life already, right? I've tried that a few times; I walk over to my sewing stuff, open up my box of buttons and start to toss it in with the masses of other tiny ziploc bags (seriously, can I buy those online?). You're NEVER going to use me. Crap, is the yarn taunting me again? You don't know that. I might, anythings possible, I retort, channeling my best 13-year-old-girl-attitude, and top it off with a dramatic eye roll. Liar! You don't even know how to knit. That stupid yarn is so smug. Fine, guess where you're going? I walk to the garbage. I stand there. A few awkward minutes pass. I just can't bring myself to throw it away. This probably has to do with growing up in California, where I was taught in school that throwing something away is akin to murder, smoking, and voting for a conservative. Damn. I walk away. The yarn is back on my desk.

I think I've got it. I'll just learn how to knit. I could easily justify keeping a little length of yarn around if I knew how to use it. Problem solved. Take that yarn-o. So I walk over to my master to-do list. I'll just pencil it in: learn to knit. Let's see, right after clean out the garage, mulch the garden, touch up the baseboards, remodel the master bathroom, replace the kitchen counters, make a chore chart, buy new clothes for the kids, save the world, and print out and organize all our pictures from the last 4 years. And that doesn't even include all the TV I need to watch. Sigh. I think the yarn is laughing at me.

This yarn thing keeps reminding me of my grandma, who we'll call Grams for privacy reasons. Grams lived through the Great Depression and could not throw ANYTHING away. We have an oft-told family story of my cousin taking donuts to share with Grams, only to come back a few months later to find that Grams had saved the remaining half of a donut in the freezer for their next visit. My grandparents lived in Nigeria for a while, and traveled all over the world. My memories of their house involve room after room of interesting, old, and exotic things stored away on shelves and in drawers, closets stuffed with African fabric, colorful jewelry and beads, and an entire room full of ancient food storage. Grams passed away 2 years ago, a little over 3 years after my grandpa died. Last Summer my mom and her siblings got together to divvy up their parent's possessions. My mom came back with a van full of treasured items, among them an email that I had sent Grams a few years ago which she had printed out and wrote on it, "From Donna, Joyce's daughter." I bet she had a file just for that email. She probably had a file for little ziploc bags of yarn too.

I think I've decided. I am going to save that little bag of yarn. In honor of grandma's generation that just could not waste anything. I'm going to put it in the diaper bag, because you just never know when you'll need some yarn, you know, MacGyver style (quick, I need some gum, an old battery, and about 3 inches of brown yarn to deactivate this bomb!). So next time you need some yarn in a tiny bag, I've got you covered. But if you come over and leave me with a half eaten donut, I'm probably going to throw it away... At least I think so. I'm pretty sure. About 72% sure.

Notes: This is my oldest reject post, and also the last in my series. This is the one I've been dreading. It's been in my post-list since 2008. I think it was the first post I ever attempted to write that wasn't about my kids, or anything that we did, or even about anything at all really. It started with the MacGyver bit, one day as I was staring at that bag while I was supposed to be doing something else. Originally it was not very good-- it felt like a bunch of jumbled up one-liners with a weird reference to my grandma thrown in there. I revised it a couple of times, convinced myself to delete it at least 32 times, but I never could. I just wanted to see it to it's fruition so badly. I'm sure you are all very embarrassed for me now. Don't worry, there was a good year in there that I didn't even think about it at all. But this whole month while I've been digging up these old posts, I knew this one was there and that I wanted to finish it and publish it. I don't know if it was really worth the time I spent on it today, but I have to say, after a little, OK a lot, of editing today, I think it might be my favorite reject. I knew it had it in there. I still have that bag of yarn. I'll probably never learn how to knit. And yes, it really does drive me crazy to have to throw things away. Even blog posts that I never finished.
Posted by MAB at 11:19 PM

I had to wipe a tear or two from laughing...I think this one's my favorite.
I have a hard time throwing some stuff away, too. (And I have a whole wall of Ikea Pax to keep them all organized.)

Best one, Donna. Thanks for the rejects.

Man, I wish I would have thought of this post!! Hilarious and so me!! (except for the conservative part) ha ha ;)

Loved the rejects and the fact that you write on your blog instead of just post pictures (like me). I feel like as the years go by, I move further and further away from writing and if I don't start soon, I may entirely forget how to do it. I am surprised you didn't mention Gramm's recycling of ziploc bags but the donut is funnier. Sorry about the lice. So sorry.

Love, love, love the rejects! And with the same emphasis, hate those darn little bits of yarn or spare buttons.

Very funny Donna! I used to save the buttons and bits of thread and yarn. First I'd put them in my "in-box basket", and then later I'd move the whole collection to my sewing box, but first I'd stop and take the buttons and thread/yarn out of the baggies first. One day, I was doing this when I realized I'd already gotten rid of whatever item of clothing went with the button, because the kids had outgrown it. That was the moment I began questioning the need to keep those buttons and thread. Recently, I've been throwing them out with the tags.

The image of you standing over the trash, deliberating what to do reminds me of something I heard this past Earthday: "Recycling is the philosophy that everthing has value, except your time." Could be said about 'over-organizing' as well. (I know, knee-jerk reaction is, can there possibly be such a thing? Apparently, after reading your reject #10, yes there can be.)

Thanks for the laugh!

I loved all the rejects. This was a really fun idea. You are a great writer.

I gotta tell you too, the bit about Grandma B was priceless. When we moved into their house we were given permission to start slowly, slyly getting rid of junk. Oh, the drawers (plural) of washed ziplocks and old bread bags and cupboards (plural again) of yogurt and margarine containers (which i recycled of course, being from Oregon) and even the piles and piles of twist-ties! The crazy part is, I felt really bad about throwing it all away...what if someone came in and got rid of all my possibly-still-useful junk behind my back? I think I'd cry like you see people do on those TLC Clean Sweep-type shows. Good thing Grandma never really noticed. Her legacy lives on, however...among the many odds and ends we inherited from the "Great Clean-out of '09" were some amazing craft magazines from 1975-81. No sign of shoulder pads, but maybe we can learn macrame at the reunion.