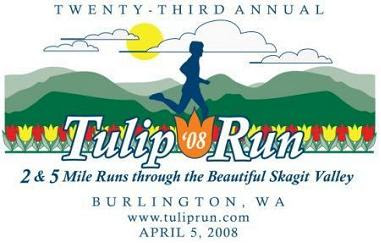 Today was my race- the Skagit Valley Tulip Run. It takes place during the annual Tulip Festival, so you would think that the course would come in at least close proximity to a tulip field, or cluster, or maybe some tulips in a pot or something. But there was not a single tulip to behold the entire 5 miles- go figure. It turned out that the tulips aren't even in bloom yet, although it wouldn't have mattered anyway because the route still wasn't near any fields. It was beautiful though, and FREEZING, which made for a miserable husband. Somehow Mark didn't get the message that the forecast was cold and rainy. Hmmmm, somehow when I told him "It's going to be cold so I can't wear my maternity tank top and shorts to run in," and "the kids need to be dressed really warmly," along with all the extra jackets and umbrellas I put in the car, you'd think he would have picked up on it, and brought a jacket.
Anyway, back to the race. I've always wanted to do some short race while pregnant, and this 5 mile run during the Tulip Fest seemed perfect. In my mind, it was going to be a sunny spring day running amidst fields of brightly colored tulips, followed by a day of family fun at the Tulip Fest. Well, we've already covered the sunny spring day and tulip part, more on the "family fun" that wasn't later. But lest you think that I'm either a super star runner or very careless, let me reassure you that pretty much everyone in the race passed me and I took it very easy and slow. When I decided to do this a month or two ago, I was only running about 3 miles at a time, and started having problems with my legs feeling really heavy and tired. It got better, but I wasn't able to do any hills, or ever get up to 5 miles. So I started to worry about this race, but I figured the worst case scenario was having to walk at times. So the course was completely flat, my legs felt great and I was able to run the whole thing! My time was just under 1 hour, which is about my pregnancy running pace, and I wasn't even last. The only funny thing that happened was right as I was nearing the finish line, there was a group of bystanders that starting yelling "go Mom!" as I was passing. I assumed because of the belly that they were talking to me, and it was only after I smiled and waved, and I believe even gave a thumbs up, that I realized they were probably cheering for their actual mom who was running behind me. They've probably been laughing about that all day. It felt great when I finished. I just missed my running partners, none of whom were able to make it- wish you could have been there guys! 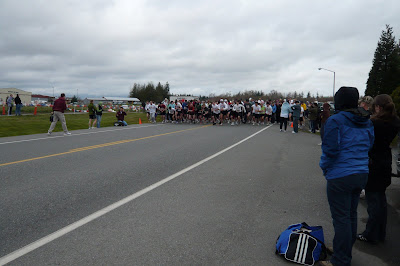 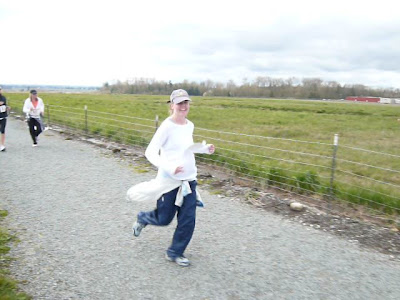 Nearing the finish line. Notice the blurred quality to do my husband's shivering hands. 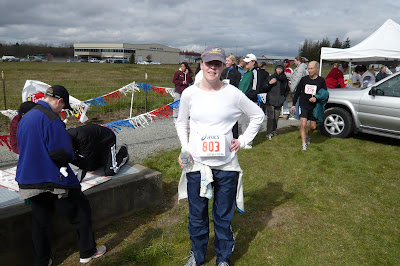 After the race- the only really decent belly shot.


On to the Tulip Fest. Since this is already a long post, let's see if I can sum up the misery in a few words: freezing weather, almost no tulips, unbelievable prices, overtired children, a 2 year old who was not excited about being restrained in a way, overpriced and extremely disappointing lunch, and a very grumpy husband. Oh yeah, and a tired, 7 1/2 month pregnant mom who just ran 5 miles. Hurray for family fun! 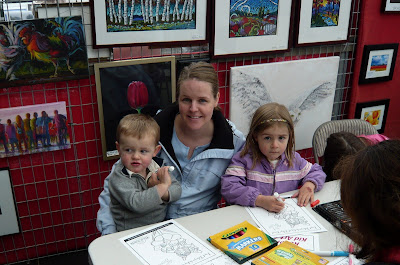 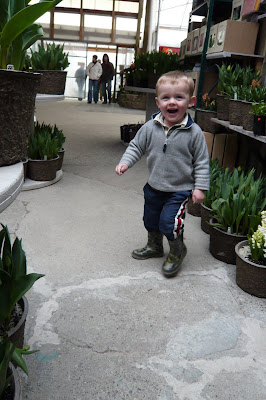 We finally let Sam loose and you can see that he was very happy, and not at all restrained. 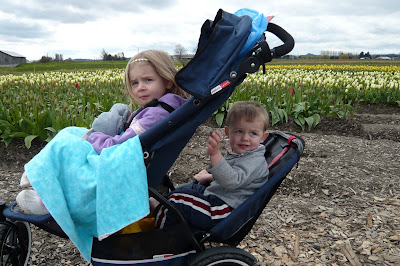 The only tulips in bloom. This picture in no way does justice to how cold it was, or how unhappy the kids were. 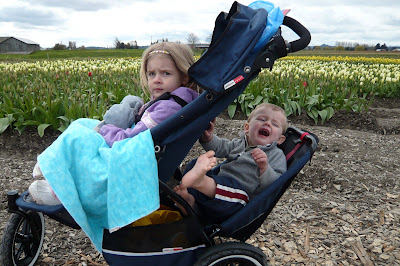 This one's a little better. Notice the bare feet- all part of the tantrum. Immediately after this photo we left, got home and took long naps. We were much happier then!


Good times. I guess if it doesn't kill you, you can always blog about it.

I'm so bummed I wasn't there!!! I could have shivered, eaten expensive food, and let Noah run free with you!

Way to go though! Yeah for Donna!

Hooray! I'm so proud of you running the whole thing, and all by yourself too. What a loser running partner you have to ditch you at the last minute! We did drive past the sign that said tulip run on our way to the ferry and I thought to myself, "Where are all the tulips?" I'm glad you all survived and got your naps afterwards!

That's hilarious! Good job on the race. It's always fun to have good ideas that turn into not-so-good ideas when they actually occur. ;) Thanks for the laugh. You look amazing, btw!!

Leave it up to Donna to run a race when most other women are moaning in bed! You never cease to amaze me! congrats on the pregnancy! Boy or girl?

Sounds like my idea of purgatory. You make me laugh my head off.

Way to go, Donna! I totally admire you for running a race while pregnant. I'm sorry about the nasty weather and grumpy husband. At least you all got naps afterward :)

im seriously concidering calling cps. running while your "great with child" is technically abuse. you should have called me. i totally would have run with you, and if you even thought about crossing the finish line before me, i would have knocked you down.